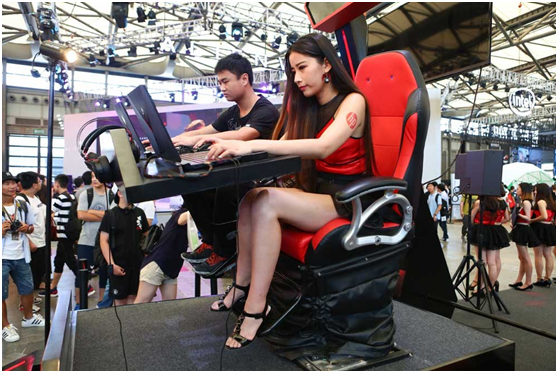 Players have a taste of the latest games and technologies like VR during ChinaJoy in Shanghai.

CHINA'S “Belt and Road” initiative aims to create a modern version of the Old Silk Road, but instead of exporting products like silk and porcelain, it is providing a conduit to take the mainland’s game and entertainment services to the world.

The digital Silk Road was a highlight of the recent ChinaJoy show in Shanghai, Asia’s biggest game fair.

Among new developments, a Chinese developer is turning “Game of Thrones,” the fantasy world first described by American author George R.R. Martin, into a mobile game, and the 600-year-old Chinese saga “Journey to the West” will become a Sony PlayStation game.

“Games are part of the future world, connecting everything across countries and cultures,” Edward Cheng, vice president of Tencent, told a forum at ChinaJoy.

National game industry revenue in the first six months of this year surged about 20 percent to almost 100 billion yuan (US$14.5 billion) amid booming mobile Internet development and cross-industry integration, according to the China Gaming Industry Report released during ChinaJoy.

Games developed in China generated revenue of US$3.99 billion in overseas markets in the first half, up 58 percent from the same period a year earlier, according to the report, which was compiled by International Data Corp and other research firms in the industry.

“It’s not surprising to see people playing China-developed games on the streets of Brazil or Iran,” said Robert Xiao, chief executive of Perfect World, which has released games in more than 100 offshore markets since it started global expansion in 2008.

During ChinaJoy, Hong Kong-listed Linekone announced the release of a music entertainment application for Southeast Asia markets, targeting people aged between 13 and 24. It is the latest overseas expansion for the mainland company after its entry into South Korea, the US, Hong Kong and Macau.

Progress in Chinese game development and overseas sales hasn’t gone unnoticed by global giants like Google, Nvidia, Sony and HTC. They have offered to collaborate with mainland companies to hitch a ride on the digital Silk Road.

The growth engine for Chinese developers expanding overseas is the mobile game app. In the first half of 2017, the overseas revenue of mainland mobile game publishers jumped 130 percent, with top markets in the US, Japan and Taiwan, said App Annie, a research firm tracking mobile application performance.

The rising popularity of smartphones and China brands like Huawei and Xiaomi has helped fuel the mobile game business. Mobile phones with user data allow firms do efficient marketing with limited resources.

The convergence of digital entertainment with game, film and literary sectors is creating new opportunities to connect China and overseas markets.

Last weekend, Shenzhen-listed Youzu and Warner Bros announced a new mobile game based on “Game of Thrones.” It was the first mobile game license granted in China by the interactive entertainment division of Warner Bros.

In the emerging virtual reality sector, Chinese device vendors, including Pico, Hypereal and Ant VR, are making great inroads in the market, according to Jason Low, an analyst at research firm Canalys.

Ant VR, which released its next-generation virtual reality headsets during ChinaJoy, said it expects rapid growth in consumer and business markets and plans to expand offshore, starting with Taiwan by the end of this year.

Qin Zheng, chief executive of Ant VR, said the company is entering corporate markets with entertainment and educational services — a unique opportunity, he said, compared with rivals focusing on consumers only.

Giants on the bandwagon

Major global player like Google and Facebook, which are currently barred from operating on the mainland, didn’t reserve exhibition space at ChinaJoy, but they did host forums in nearby hotels to attract Chinese game developers.

About 17 percent of game players contribute 85 percent of the income of most mobile applications. Google is helping Chinese developers to target high-value players with tools like AdWords and the latest artificial intelligence technologies.

Under its China Hero Project, Sony is supporting the development and global distribution of new PlayStation games created by Chinese developers. Ten titles under the project were announced during ChinaJoy, including a game based on the movie adaptation of “A Journey to the West.”

Nvidia is also involved in a project to help China’s net cafe upgrade and transformation.

Also recently, US-based game device firm Razer announced that it will do an initial public offering in Hong Kong later this year to tap the Chinese market.