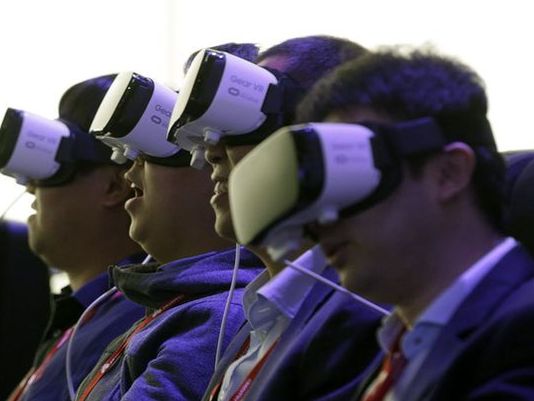 This is the first time investment in the industry has topped $1 billion "in any year, let alone in two months," says Tim Merel, founder of industry advisors Digi-Capital, whose Monday report notes that the sum is anchored to nearly $800 million raised by Magic Leap last month.

Alibaba, Google and a slew of financial firms are investors in the Florida-based company, which makes software for augmented reality that overlays virtual images on the real world.

The turbocharging of investment into this new technology suggests that its promise is huge. But a new Deutsche Bank report argues that VR/AR may take its time to enter the mainstream. In "Has VR Finally Arrived?" Deutsche analysts draw a parallel to the five years it took for smartphones to catch on after the seminal advent of the Apple iPhone in 2007.

"We think the VR ecosystem is in its '2007-smartphone' moment in terms of the adoption cycle," write Ross Sandler and his fellow Deutsche analysts. "It took 4 to 5 years for smartphones to reach 100 million users in the U.S.; we expect a slower adoption curve for VR, but still strong enough for an enormous market."

Just how big? Deutsche Bank forecasts that by the end of this year, Sony PlayStation VR will have 2.5 million users, while Oculus Rift and HTC Vive will have 1 million each. All of those computer-tethered VR products are available on pre-order now at prices that range from $600 if you have a compatible computer, to $2,000 if you do not.

Mobile VR — that is, virtual reality accessed via smartphones — will be the biggest winner with 18 million users by year end. Samsung Gear VR, a $99 device that brings a smartphone to VR life, is "likely to ship more than 10 million units (this year), up from 250,000 last year, which will cement its early position in mobile," the report says. 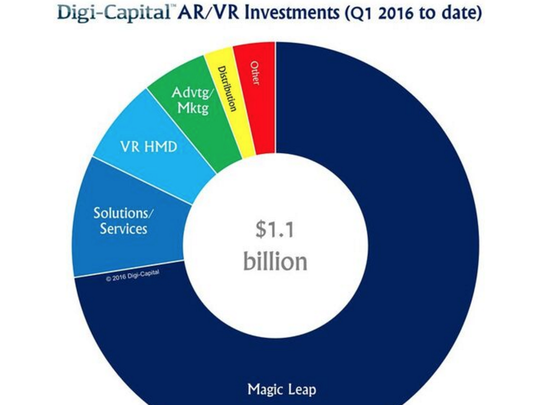 Digi-Capital reports that $1.1 billion in venture funding flowed to a range of AR/VR companies in the past two months. (Photo: Digi-Capital)

Much of today's spotlight is trained on Oculus Rift, which Facebook CEO and AR/VR evangelist Mark Zuckerberg bought in 2014 for $2 billion. The Deutsche Bank report said Oculus "is likely to generate $600 million in Rift hardware this year, and $35 million in software and in-app purchase revenue."

They then add, intriguingly, "it is admittedly difficult to imagine Facebook staying in the hardware business longer term if VR takes off. Like the Google Nexus approach in smartphone, we think Rift may continue to push the envelope and innovate at the high end, providing goal-posts for the rest of the industry including mobile VR to aspire to."

But much like the excitement over the first iPhone was followed by the buzz-kill resulting from how few apps existed for the technology, AR/VR could experience the same let-down moment after this year's flood of pricey new gear hits consumers given the relatively limited content options beyond video games.

Wrote Sandler and his colleagues: "We think VR could see a similar trend, whereby after all the hardware adoption in 2016 and into 2017, media outlets and analysts may start asking 'well where is the killer app?' and 'why are all these VR systems collecting dust?' There is a fairly high probability that the 'Gap of Disappointment' may be a theme for the Consumer Electronics Shows and Mobile World Congress in 2017."

While Deutsche Bank did not project total market size in dollars, others watching the space have suggested that VR and its augmented reality (AR) cousin could eventually account for tens of billions in revenue.

Digi-Capital projects that AR/VR will be a $120 billion market by 2020, with AR devices such as Microsoft HoloLens and ODG R-7 accounting for 75% of that sum. Digi-Capital previously had estimated the market at $150 billion by 2020.

Goldman Sachs put out a note in January saying AR/VR could be an $80 billion market by 2025, though an "accelerated uptake" scenario — which would see everything from entertainment to real estate disrupted by the technology — rockets that number to $182 billion.

And late last year, Macquarie Research analyst Ben Schachter used a tailgating analogy to describe the early stages of a new game. "For VR/AR, we have just pulled into the parking lot and tailgating is about to begin," Schachter wrote. "By the end of 2016, we'll have a better sense of what's been brewing at Google, Microsoft and perhaps Apple might even stop by just to see where this is all going." 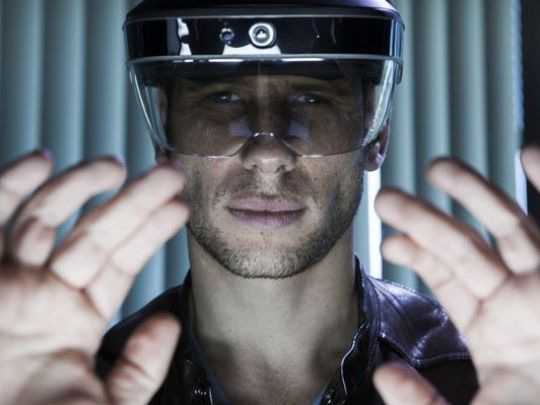 Alphabet unit Google took an early stab at augmented reality wear with Google Glass, a $1,500 device with limited use cases and a cyborg stigma. It killed the product a year ago, but has since been very aggressive about developing a range of VR options such as Cardboard and a 360-degree rig produced by GoPro. VR devotee Clay Bavor now leads the charge at Google, which led investment in Magic Leap's $543 million Series B round in 2014.

Apple has not said publicly if it is entering the AR/VR space, but acquisitions such as motion capture company FaceShift — which builds a technology that overlays facial gestures onto a visual avatar — would indicate that it doesn't plan to sit out what could be the next big thing in personal computing.

In fact, a Silicon Valley AR started called Meta is busy making AR headsets that allow users to see and manipulate holograms in space. Its founder and CEO, Meron Gribetz, has said that the company's mission is "to get rid of the computer" and replace it with augmented reality representations of our physical gadgets.